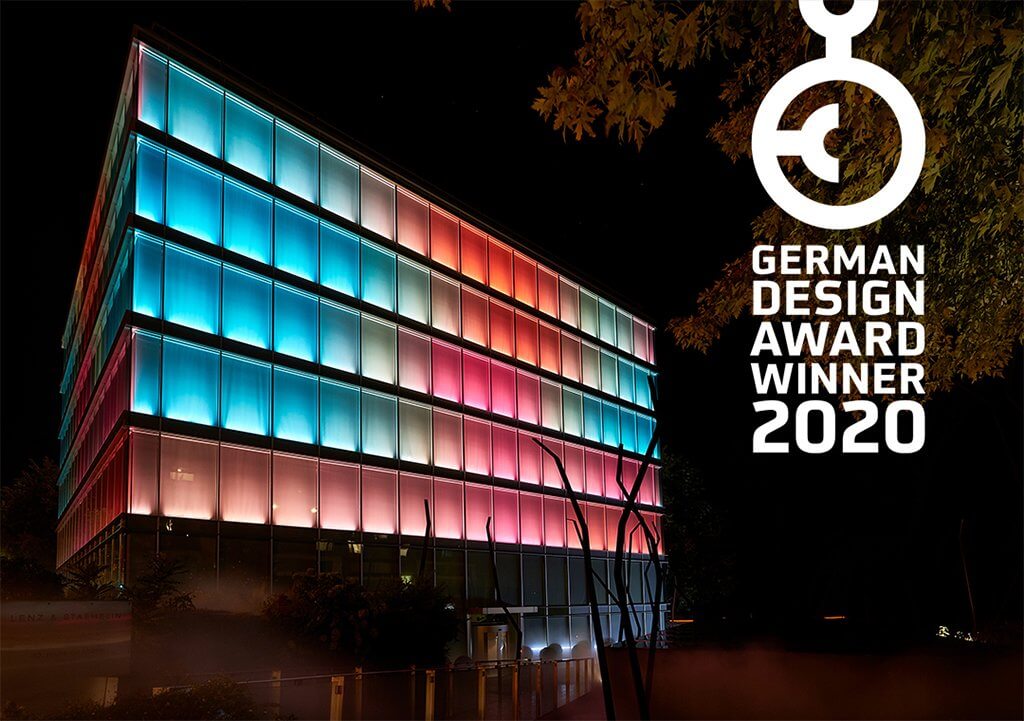 Located at 30 Route de Chêne, the Amandolier Building, whose night-time lighting was renovated by the SPG Prorenova Division in collaboration with Lighting Design Collective, has been awarded a victory in the Excellent Architecture category of the German Design Award 2020. Each year, this prestigious competition recognises the best projects, selected from among thousands of entries from Germany and around the world.

The fifteen-year-old façade lighting of the Amandolier Building was due for updates at the technological and environmental levels. In 2017, in partnership with the architectural lighting engineers of Lighting Design Collective, SPG Prorenova devised a lighting concept combining modernity and visual art.

The results proved to be innovative, original and unique to Geneva. The building’s 340 windows are illuminated from dusk to dawn by a light show on the cutting-edge of technology. The system consists of new-generation LED lights that consume a negligible amount of surplus energy during the night-time hours.

Using electricity at night prevents wasting the surplus energy that is produced during periods of low consumption. It also makes it possible to maintain the network during these off-peak hours. Additionally, an astronomical timer was installed to turn off the lighting transformers during the hours when the facility is not in use. This prevents the consumption of electricity when they are connected, but the lights are not being used during the day.

The Amandolier Building with its elegant cubic structure plays a role that goes far beyond simple functionality: by day, it reflects the life of the city and, by night, it takes on a life of its own with a spectacular light show. The lights appear to dance across the façade, transforming the entire building into a bona fide work of contemporary art. Thus, its visual identity is constantly renewed, as full-fledged scenarios featuring the interplay of light and colour are executed continuously from the moment night falls. This fascinating result, allied with the simplicity of the cubic structure, was what finally convinced the judges of the prestigious competition.

This victory rewards the expertise of the SPG Prorenova Division and the company Lighting Design Collective. This recognition is no small matter, considering that the German Design Award is a well-known, highly respected institution in the international world of design, with an excellent reputation that extends far beyond specialised fields. Established in 2012, the competition supports design in all its forms. It is extremely selective, given the fact that all of the entries must be nominated beforehand in order to compete. The awards ceremony will take place on Friday, February 7 in Frankfurt, during the Ambiente Fair.