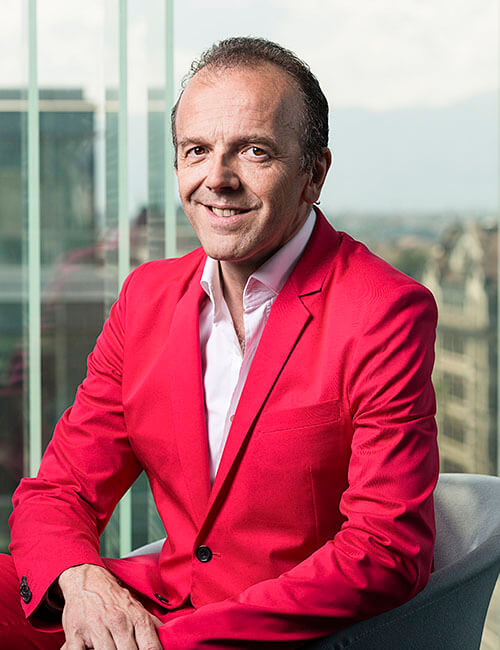 A graduate of the Faculty of Law of the University of Geneva, he completed various internships in banking, finance and culture between 1981 and 1983. These internships took him to Vienna and New York where he passed the Futures Industry Association’s examination. Back in Geneva in 1984, he joined Société Privée de Gérance (SPG), founded in 1960 by his father, Jean Paul Barbier-Mueller.

He started as General Secretary of SPG and publisher of the magazine L’Information Immobilière; he was then promoted to Administrator of SPG and then Chief Executive Officer in the 90s. He participated in the development of the SPG Group which resulted in 1988 in affiliation to real-estate agency RYTZ & Cie SA, of which he was then the Administrator alongside his Vaud partners, Yves Rytz and Gérald Morand. From then on, the company was known as the SPG-Rytz group.

In autumn 1997, Thierry Barbier-Muller launched the journal named Immorama, which is aimed at the general public and is partly devoted to news of Swiss and international real estate.

The SPG-Rytz group’s network of expertise expanded from being regional to national and then international with, in 2001, the launch of a joint-venture with the Intercity Group (Zurich, Lucerne, Basel, St.-Gallen and Bern), which resulted in the creation of SPG Intercity. This commercial property specialist is the exclusive representative in Switzerland of the Cushman & Wakefield Group, which is established in about 60 countries.

In 2005, Thierry Barbier-Muller signed a partnership with Christie’s Great Estates which in the meantime became Christie’s International Real Estate, a specialist in upmarket real estate and a subsidiary of the famous British auction house.

In 2015, in the context of a controlled expansion, he took over the management of CGI Immobilier’s condominiums, thus consolidating SPG’s Pcondominium portfolio.

In a personal capacity, Thierry Barbier-Mueller has developed a construction/property development  activity, one of the most striking achievements of which was probably the glass building constructed in 2004 and located at 30 de la Route de Chêne (8,000 sq. metres of office space). Part of its contemporary garden, which was the result of an international competition, was given to the City of Geneva. In the Eaux-Vives district, he was in charge of the construction of a prestige block of offices and apartments (Minergie-certified), Le Patio de Frontenex, then the Saint-Georges Center which is an office building located in the business district of Geneva, designed by Sauerbruch Hutton, Berlin’s star architects.

Preoccupied by the aesthetic, functional and environmental quality of outside facilities in the City of Geneva, in 2009 Thierry Barbier-Mueller launched in 2009 – in partnership with hepia, Geneva’s school of landscaping, engineering and architecture – an annual competition for ideas.

In 2013, to support French-Swiss literary writing, he created the SPG Literary Award which rewards every year the first literary work of a French-Swiss author published by a Swiss publishing house.